The law can be an ass (i.e. a donkey), badly applied/ administered or inconsistently applied — in effect on an à la carte basis. The acquittal on Tuesday of Seán FitzPatrick, former chairman of Anglo Irish Bank, of all 27 charges of breaches of Irish company law, exposes the State's corporate watchdog, the Office of the Director of Corporate Enforcement (ODCE), as seeking to frame a case against him rather than “investigate the case independently and impartially" in the words of Judge John Aylmer.

Since 2008 charges of false accounting and other company law breaches have resulted in several former bankers appearing before the courts and some are in prison. The gallery of the reckless is well populated but there is a hypocrisy at the heart of Irish company law — a blind eye is turned to what is effectively false accounting by large multinationals booking big value artificial transactions as part of tax avoidance schemes.

The extraordinary indictment of a State agency for breaches of its constitutional obligations and incompetence, follows the revelations since the bust in 2008 that the Central Bank and its Financial Regulator promoted what was termed the "green jersey agenda" where a green light was given to inter-bank support in unravelling the 25% stake that Seán Quinn, a billionaire businessman, had built up in Anglo Irish Bank through contract for difference (CFD) bets.

In his third trial since resigning as chairman of the bank in December 2008, FitzPatrick was charged with providing auditors false information about multi-million euro loans to him and to people connected to him between 2002 and 2007.

EY (formerly known as Ernst and Young), one of the Big 4 accounting firms, is the subject of a law case brought by Irish Bank Resolution Corporation (IBRC), the successor company to Anglo Irish Bank.

In yesterday's judgement, Judge Aylmer said the statement-making process for EY auditors Vincent Bergin and Kieran Kelly involved negotiations between ODCE investigators and A&L Goodbody, the Dublin law firm representing EY, resulting in witness statements included in the book of evidence which had been drafted entirely by people other than the witnesses.

EY was also in a conflict of interest situation as a guilty verdict in the case would have strengthened its case against the IBRC suit.

The senior ODCE investigator did not have the required experience to handle the FitzPatrick case and the judge said documents were shredded by the agency. 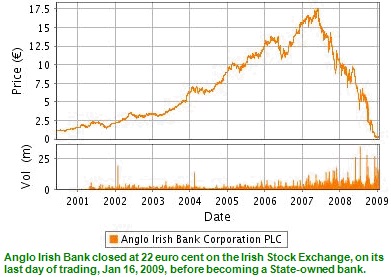 A previous trial on the same charges collapsed and the third trial of the former banker lasted 126 days — the longest criminal trial since 1922. The taxpayer pays all costs as FitzPatrick was declared bankrupt in 2010.

Coupled with the long-running public tribunals from 1997 which made several lawyers millionaires, and produced little reform, we can see what happens in a buck stops nowhere system.

The perception that there is one law for the little guy and another for big firms and the powerful is not irrational.

Company law charges were rarely made against directors of big name local firms until the bust and the foreign-owned firms continue to operate without having to worry about the ODCE or the Revenue.