Robots and other technological advances such as artificial intelligence (AI), and driverless vehicles, will enable countries in Europe with declining populations to sustain economic growth. Migrants may as well, but those populations do also age while large-scale migrations can result in political and social discord.

Eurostat, the European Union’s statistics agency, reported in July that the population of the EU-28 as a whole rose during 2016 but the population of 10 EU countries fell. It also reported that 2016 was the second year (since the series began in 1961) when there was a slight natural decrease in the EU-28. The population change was therefore due to net migration.

Ageing, which is the process of growth in the number and proportion of older persons in a population, is typically viewed as a negative factor for economic growth and Japan  ̶  the first big rich country to experience a falling population in recent decades  ̶  is often cited as an example.

However, technological developments may mean that a fall in the number of people of working age can be offset by advances in technology.

Daron Acemoglu of the Massachusetts Institute of Technology (MIT) and Pascual Restrepo of Boston University in a January 2017 paper, ‘Secular Stagnation? The Effect of Aging on Economic Growth in the Age of Automation, argue that countries experiencing more rapid ageing have grown more in recent decades, reflecting the more rapid adoption of automation technologies in countries undergoing more pronounced demographic changes.

"Since the early 1990s or 2000s, the periods commonly viewed as the beginning of the adverse effects of ag(e)ing in much of the advanced world, there is no negative association between ag(e)ing and lower GDP per capita"

The authors say that their findings “demonstrate that the scarcity of younger and middle age labo(u)r can trigger sufficient adoption of robots (and other automation technologies) so as to actually increase aggregate output, despite the reduced labo(u)r input.”

The authors add that they used “data from the International Federation of Robotics (IFR), which provides information on industrial robots across a range of industries for 49 countries. “

A 2017 paper based on a master’s thesis at the University of Lund, Sweden, suggests that more automation could lead to economic collapse. 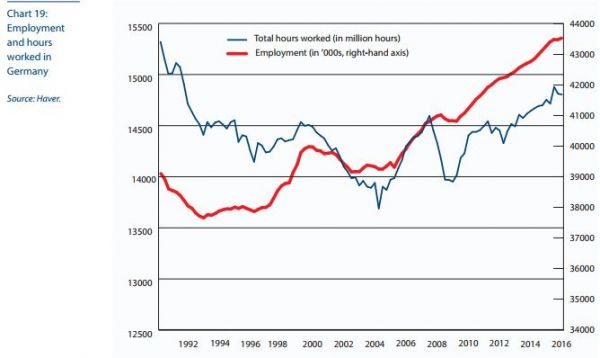 Existing trends in US manufacturing reflect advances in technology and changing roles of workers.

The output of US manufacturers hit a low in June 2009 but it has risen 21% since then while there has only been a 6% increase in employment according to Federal Reserve and Bureau of Labor Statistics (BLS) data.

BLS data also show that production accounts for just 2 in every 5 jobs in US manufacturing while management and professional jobs account for about one-third  ̶  for example software development is an important part of car and machinery production.

While demographic forecasts may turn out to be accurate such as the number of people aged 15-64 in the “high-income countries” that is set to fall by a little less than 10% by 2065  while the number of people aged 65 and up is expected to rise by around 80%, Matthew C Klein of FT Alphaville, wrote in 2016 (if you're not an FT subscriber, you can register for free), "Small changes in behaviour are more than sufficient to offset the slow-moving forces of demographics."  He added that in the US for example, "there has been essentially no relationship between the changes in America’s 'working age' population and the changes in the number of Americans actually working."

In Germany and Denmark in 2016 75% of the working-age population was employed compared with 65% in Ireland and 67% in the EU-28 but as Germany added 15% more jobs since the mid-1990s, the number of hours worked did not keep pace (see chart above). Behind headline , may also be hidden underemployment.

Finally, with fewer workers in an economy, the balance of power between labour and capital could shift while automation may also improve productivity.

This article is from the September 2017 issue of Wired:

The Great Tech Panic: Robots Won’t Take All Our Jobs Alberto Alesina, the Italian economist and collaborators, wrote in a paper in 2013: “The question of what makes different countries more or less successful economically and what explains the quality of their policies is one of the most fascinating that economists can ask, but it is also one of the most difficult to answer.” 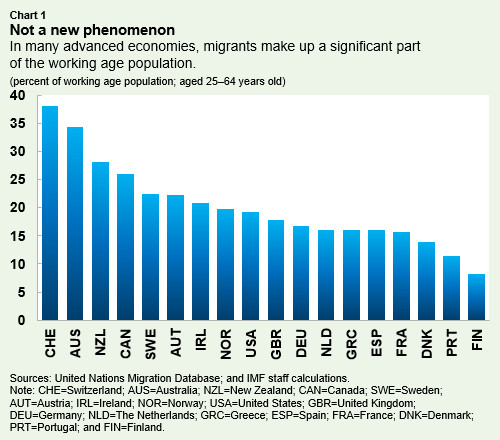 The Organisation for Economic Cooperation and Development (OECD) said in 2014 that "Over the past ten years, immigrants represented 47% of the increase in the workforce in the United States, and 70% in Europe (OECD, 2012). Across OECD countries, only a relatively small part of these workforce entrants came through managed labour migration (which represents only a fraction of all movements to the OECD), and more came through other channels, including family, humanitarian and free-movement migration."

Martin Wolf, chief economics commentator of the Financial Times, commented in 2015: "In 2014, there were 29 dependants aged 65 and over for every 100 people of working age. According to the UN, keeping this ratio below a third would require immigration of 154m between 1995 and 2050, with far more thereafter: immigrants age, too, after all."

In the long-run according to an OECD study the fiscal impact of cumulative waves of migration over 50 years in member countries, and concluded it was on average roughly zero.

"One study that looks at the impact of migration on economic growth for 22 OECD countries between 1986 and 2006 demonstrates a positive but fairly small impact of the human capital brought by migrants on economic growth. The contribution of immigrants to human capital accumulation tends to counteract the mechanical dilution effect (i.e. the impact of population increase on capital per worker), but the net effect is fairly small, including in countries which have highly selective migration policies. An increase of 50% in net migration of the foreign-born generates less than one-tenth of a percentage-point variation in productivity growth (Boubtane and Dumont, 2013)."

The EU population was estimated at 511.8m in January 2017, compared with 510.3m a year before. During the year 2016, as many births as deaths were recorded in the EU (5.1m), meaning that the natural change of the EU population was neutral. The population change (positive, with 1.5m more inhabitants) was therefore due to net migration.

The Economist reports that in “1950, four of the world’s ten most populous states were in western Europe alone. But decades of falling birth rates have resulted in slower population growth in Europe than in other regions. By 2017, Europe’s most populous country, Germany, ranked just 16th globally. The continent’s birth rate is now so low that the total population in many European countries has begun to decline.”

According to Eurostat by 2050, only Ireland, France, Norway and Britain would see their populations rise without migration. In contrast, Germany and Italy without migration would have declines of 18% and 16%. And even if migration does continue, Eurostat’s central forecast is that Germany will still only just about maintain its current population of 82.8m.

By 2080 there will only be two persons of working-age for each elderly person.

Eastern European migration may have peaked

The Economist also comments that before the UK opened its borders and job market to the citizens of 8 eastern European countries in 2004, its Office for National Statistics forecast that 5,000-13,000 migrants would come each year. “In the end, in the first decade, 1.5m arrived, in what by some measures was the single biggest inflow of people in Britain’s history. Poles are now the country’s largest foreign-born community. And a new generation is blooming: last year Polish-born mothers gave birth to 22,382 babies in England and Wales, more than any other foreign group.”