London 6th most expensive city, Dublin at 24 and Brussels at 38

Singapore is the world's most expensive city for expatriates and travellers for the third year running. The Asian city island state tops Zurich and Hong Kong in the latest rankings by the Economist Intelligence Unit (EIU), which surveys 400 individual prices across 160 products and services, and then compares all places with New York — the base city. London is the 6th most expensive city, Dublin is at 24 and Brussels, the capital of the European Union is at 38.

The EIU says a strong dollar has delivered a relative rise in the cost of living for US cities in a year marked by price and currency volatility. The ranking, which compares the price of a weighted basket of goods across 133 cities, saw the 16 US cities surveyed climb up the ranking by an average of 18 places with New York and Los Angeles featuring among the ten most expensive cities for the first time since 2002.

This increase is set against a backdrop of global fluctuation, with falling oil and commodity prices as well as currency devaluations and geopolitical uncertainty playing a part.

"In nearly 17 years of working on this survey I can't recall a year as volatile as 2015" comments Jon Copestake, an editor of the survey, "falling commodity prices have created deflationary pressures in some countries, but in others currency weakness caused by these falls has led to spiraling inflation.”

Singapore remains the world's most expensive city but is 10% less expensive compared to New York than it was last year. Only eight cities of the 133 surveyed have seen their ranking position remain unchanged in the last 12 months. From the Japanese Yen to the Brazilian Real currency weakness has driven down the cost of living in cities around the world. Even accommodating Chinese measures to weaken the Renminbi, Chinese cities have become more expensive relative to their peers. Shanghai is now as pricey as Tokyo, which was the world's most expensive city for most of the last two decades.

The EIU says that the estimated 480,000 people planning on travelling to the 2016 Summer Olympic Games stand to benefit from a spectacular decline in the relative cost of living in Rio De Janeiro. The Brazilian city fell 52 places to 113th in the ranking and is now almost half as cheap as New York. However, with Brazilian inflation creeping into double digits last year locals are not seeing the benefits that visitors are. Ironically with Russia expected to host the next Football World Cup, Rio is now as cheap as Moscow, which was the sharpest mover, falling 63 places. Similar declines in St Petersburg have put the cost of living in Russia's second city on a par with that of Kiev.

However the EIU says those attending Euro 2016 in France or the Copa America in the US will find fewer bargains on offer. Despite drastic declines in many Eurozone locations Paris remains the 5th most expensive city in the world (down from 2nd last year). Similarly a strong dollar is pushing up the relative cost of living across the US. Boston, the cheapest of the Copa America host cities, is almost 40% more expensive than Olympics host Rio and ranks 56th globally, alongside Amsterdam.

South Asian cities continue to offer the best value for money. India and Pakistan account for five of the ten cheapest cities. They are joined in the latest ranking by Lusaka, Zambia's capital which has seen its currency unwind on the back of weak copper prices and can now lay claim to being the world's cheapest city with a cost of living two thirds cheaper than Singapore, the most expensive. 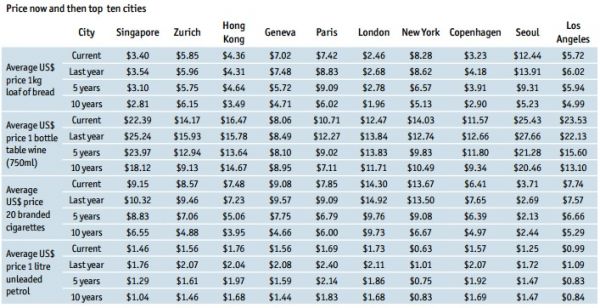 The Worldwide Cost of Living Survey 2016

Find a city on The Economist's Daily Chart

Pic above (top): Aerial view of Dublin at night showing the Samuel Beckett Bridge and the adjacent lighted  Convention Centre in Dublin's Docklands (on right).