Italy has endured two lost decades and by the mid-2020s will have endured almost 30 years of stagnation but in 2015 the typical Irish standard of living was below that of an Italian counterpart despite annual GDP (gross domestic product) growth of over 26%!

There are two economies in Ireland: the FDI (foreign direct investment) related economy and the bigger indigenous economy. The majority of private sector workers are in non-exporting sectors — these workers typically are poorly paid and they do not have occupational pension coverage.

Ireland had the highest percentage of workers on low pay among 28 Organisation for Economic Cooperation and Development (OECD) member countries in 2014 according to the OECD Employment Outlook 2016 (Page 238).

We have previously reported that Italy has had two lost decades, only growing by 3.3% per capita in 20 years but it's striking that in 2015 its individual standard of living was higher than Ireland's.

Eurostat, the EU's statistics service, reported in June that the average Irish individual standard of living in 2015 was lower than Italy's. Ireland was also below both the EU28 and EA19 (Euro Area) averages. Eurostat compares individual consumption of public and private goods and services in each member country, adjusted for price differences.

Here we provide more detail on the disconnect between official measures of growth and the reality for the typical consumer.

The International Monetary Fund forecasts that by the mid-2020s, Euro Area ex-Italy will be 20-25% larger than levels in 2008 but the third largest economy of the single currency area will only "return to pre-crisis (2007) output levels only by the mid-2020s."

The New York Times reported in 2014 that until around 1999, overall US economic growth tended to correspond with growth in earnings for middle-income Americans. Since then, the two have diverged sharply.

In 2016 Ireland had an overall rank of 17 among the 34 mainly advanced economies of the world while Italy had a 25th ranking.

In the Income category, across the OECD, the average household net adjusted disposable income per capita is US$29,016 a year.

Household net adjusted disposable income is the amount of money that a household earns, or gains, each year after taxes and transfers. It represents the money available to a household for spending on goods or services.

Ireland has high inequality but also high transfers as shown by the Eurostat chart below.

Italy has a higher average household net adjusted disposable income per capita than Ireland and financial wealth is also higher than in Ireland.

In Ireland, the average household net adjusted disposable income per capita is $22,969 a year, lower than the OECD average of US$29,016.

In Ireland, the average household net financial wealth per capita is estimated at $31,861, lower than the OECD average of $84,547. The OECD says that while the ideal measure of household wealth should also include non-financial assets (e.g. land and dwellings), such information is currently available for only a small number of OECD countries, and is not included here.

In Italy, the average household net adjusted disposable income per capita is $25,004 a year, slightly lower than the OECD average of $29,016.

Household financial wealth is the total value of a household's financial worth, such as money or shares held in bank accounts. In Italy, the average household net financial wealth per capita is estimated at $56,833, lower than the OECD average of $84,547.

Ireland has only occupational pension coverage of 40% of the private sector workforce, which results in pensioner poverty for some of the population.

Italy's Mezzogiorno region covering the southern half of the Italian peninsula combined with the islands of Sardinia and Sicily, is the Achilles heel of the Euro Area and it has some of the worst economic metrics in the European Union, including the lowest birth rate since 1862 when Italy had a total population of 22m (this number comes from Istat, the national statistics office. 26m is also cited elsewhere) compared with 59m today.

The Mezzogiorno has the lowest regional employment rate in Europe.

Since reunification in 1861, Italy has managed to balance its annual budget in about ten years and it has had an annual deficit every year since the last surplus during Fascist rule in 1924/25. Hyperinflation during the 1940s wiped out most of the public debt, which is currently at 133% of GDP. 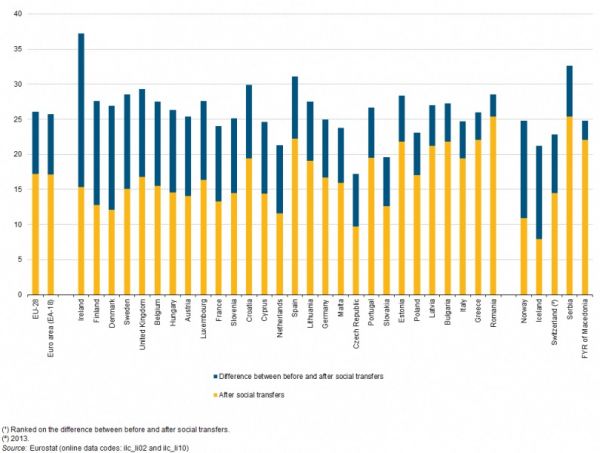 At-risk-of-poverty rate before and after social transfers, 2014

Globalization came to a shattering halt in 1914 and its second phase that began in the 1950s, with Italy and Greece as Europe's star economic performers for almost a quarter of a century, with average real (inflation-adjusted) per capita economic growth of 5.0% and 6.2% respectively in 1950-1973 compared with 5% in West Germany, 4% in France, 3.1% in Ireland and 2.4% in the United States, according to calculations by Angus Maddison, the late renowned economic historian.

The end of the post-war boom and a surge in inflation to peacetime records in the mid-1970s, resulted in a plunge in growth while budget surpluses became rare in advanced countries.

Greece had a public debt/GDP ratio of less than 17% in 1973 and 111% in 2001 when it joined the euro system while Italy hasn't had an annual budget surplus since Fascist rule more than 90 years ago and it has had about 10 years of surpluses since reunification in 1861. Gross debt was at 34% in 1974 after hyperinflation in the war years and then growth. It was at 126% when Italy joined the euro in 1999 and is now at 133%.Greece and France have reported budget deficits every years from 1974 and 1975 respectively.

We haven't included Ireland as the period covers boom and bust and a rise in GDP of 26% in 2015 related to mainly activity of multinational firms outside Ireland.