The 2011 Irish General Election was inevitably about the short-term following the bursting of the economic bubble. This time, Enda Kenny, taoiseach, has ensured that the 2016 election is a traditional short-term focus election campaign with the main arguments on taxes, bribes for voters and related budget issues, while the mainstream media also maintains a passive traditional role in being a facilitator for the politicians rather than a catalyst in forcing them to address challenges facing Ireland beyond the 2021 horizon of the 32nd Dáil Éireann.

Nothing lasts forever and today Finland, another once thriving small economy, is struggling after the demise of Nokia, the collapse in trade with Russia which had accounted for 10% of its exports, coupled with the woes of the European steel industry. Unlike Ireland, Finland is a real knowledge economy and is not over-dependent on foreign direct investment (FDI) but it is facing hard choices in adjusting its economy.

The lack of Irish focus on long-term challenges is not just a general election issue as in contrast with the times of Thomas Kenneth Whitaker (who hopefully will celebrate his centenary next December) when he was the head of the Department of Finance in 1956-1969, the civil service in recent decades has been politicised and the typical government report is laced with spin with seldom a recognition of weaknesses.

Whitaker's key 'Economic Development' report, which was published in 1958, sought an end to the “economic decadence” of emigration and unemployment but what if the main assumptions had been based on distorted data and ministers had ordered inconvenient facts to be omitted? Fast-forward to December 2015 when the Government issued a report it called an "innovation strategy" with key metrics based on tax avoidance-related distorted data while the results of a 2014 report on patenting commissioned by the Government from a British IP (intellectual property) consultancy, were excluded: "Ireland’s patenting is consistently lower than the comparator countries chosen," according to the patenting report.

Dr Whitaker said in 1987 that he would like to see:

a restoration of the old (civil service) principle that you were independent of ministers. You gave your views on any new proposals fearlessly, critically, honestly. You did not care whether your views were likely to commend themselves to the minister, whether for their own sake or politically. Once a decision was taken by minister or government, however, you carried it out as loyally and efficiently as you could. That was my understanding of the function of senior civil servants but I’m afraid it has been undermined. The young men who are preoccupied about this generate deep disappointment in me by telling me that that was an old world that has vanished. In the new world, the civil servant is all the time trying to please the minister, over-conscious of what might be politically acceptable, arranging the options so that they will appeal, rather than in strict order of eligibility.

The unemployment rate was below 6% in 1958 and as today, the headline rate masked high underemployment and emigration (see below).

We outline below some of the key issues that the media should be raising as the traditional press conference is not a useful mechanism to seek responses on facts as the persistence of Vincent Browne shows.

I attended a Fianna Fáil press conference during the 2007 general election campaign when Brian Cowen, finance minister, and Micheál Martin, enterprise minister, announced that FF would add 250,000 jobs by 2012. Only 6,000 jobs of the total of 83,000 that were created in 2006, were in the tradable goods/service sectors of the economy and I asked for comparable figures for the coming 5 years. Martin disputed my figures and he had no breakdown of the 250,000 target.

"Don't interrupt the minister," the official press handler for Richard Bruton, enterprise minister, interjected at a press conference in 2014 when Bruton answered a question he wished I had asked, not the one I had.

On Monday Finfacts reported that in 2015 ten firms accounted for half of annual corporation tax receipts or about €3.5bn in Exchequer revenues — almost enough to fund the abolition of the Universal Social Charge (USC) — while the National Treasury Management Agency (NTMA) in a briefing note warned that Ireland is over-dependent on a small range of export products and services.

It's instructive that the people who in 2013 were brushing away any need to acknowledge the facilitation of corporate tax avoidance changed tack when international reform was inevitable to arguing that Ireland may actually gain from reforms.

Also on Monday the Guardian reported that US multinationals such as Google, Facebook and Amazon will be forced to publicly disclose their earnings and tax bills in Europe, under legislation being drafted by the EU executive. The UK government supports the proposal.

The European Commission is to table legislation in early April aimed at making the world’s largest multinational corporations open their tax arrangements with EU governments to full public scrutiny.

The truth is that nobody knows what the impact of the evolving rules will be but what we do know is that it will become much more difficult to shift profits to Ireland and pay tax on profits generated elsewhere to the Irish Exchequer.

The enduring failure of the indigenous international trading sector is masked by the ministerial spin on exporting success when only just more than 20,000 jobs were added in all exporting firms (excluding tourism and transport) in the past 15 years.

Low pay in much of the private sector economy; low skills among much of the workforce [see lower end of page here]; low occupational pension coverage, and with most foreign-provided services jobs in administration, these factors do not provide a recipe for enduring wealth creation.

The NTMA estimates that goods exports in 2015 were valued at €140bn — €30bn is effectively fake and the so-called contract manufacturing relates to booking of overseas production as Irish exports; at least €35bn of the €50bn trade surplus in Chemicals + Medical Devices is related to profit-shifting while in services of about €120bn in 2015, some €60bn results from Double Irish tax avoidance —  that is an estimated fake total of  €125bn.

The boast that Ireland will be the fastest growing economy in Europe in 2016 may well be false and also this year Pfizer, the world's biggest drugs firm, will become Irish for tax purposes, further distorting the national accounts.

Fine Gael naively echoes the demand of business lobby groups and promises to cut the capital gains tax for entrepreneurs to 10% to boost startup numbers.

Any aspiring entrepreneur who decides to keep the day job because of the capital gains tax makes a wise decision as he or she would unlikely succeed on their own if their initial priority is the cash trove, after hitting the jackpot .

Endeavor, a global entrepreneurship movement, in a report published in 2014 on a survey of 150 founders, found that:

two factors that are often discussed by policymakers and business leaders — low tax rates and business-friendly regulations — were mentioned only a handful of times in our surveys and interviews. In fact, words related to specific quality of life factors, such as 'park' and 'restaurants' were discussed more frequently than terms related to taxes and regulations.

Joan Burton, tánaiste, says full employment will be achieved in 2018 and Enda Kenny says it will achieved in 2020 — they are both relying on forecasts produced by Richard Bruton, jobs minister, while the latest forecasts from Department of Finance economists have a jobless rate based on an International Labour Organisation (ILO) definition of paid work of at least one hour per week, of over 7% in 2018 and above 6% in both 2020 and 2021.

The Government suggests a 6% rate implies full-employment but several European countries have lower rates: Germany and the Czech Republic had rates of 4.5% in December; the UK had a 5.1% rate in October. Ireland's rate in December 2007 was 4.6%.

Burton and Kenny also promise 50,000 apprenticeships compared with 7,000 now, and without the inducement of public money, there is no evidence that the business sector will provide these places.

Promises on waiting lists are easily made but the big question is why such a costly health service has some of the poorest outcomes? 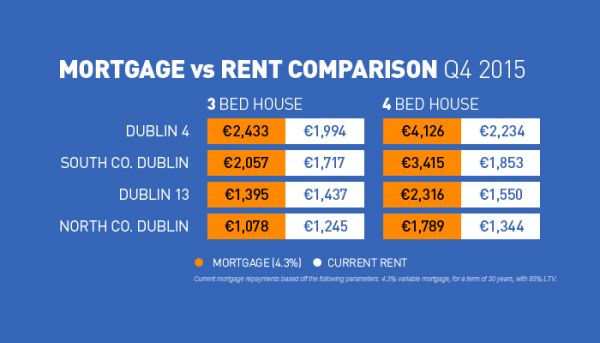 It's weird that there has been a housing crisis in Dublin from the start of a recovery, following one of the world's biggest housing busts.

Dysfunctional planning as in the UK, coupled with land prices among the world's highest, are neither good for the housing market or food production. Nimbies coupled with the misreading of the Ballymun high rise public social housing experience from the 1960s has resulted in an effective ban on high rise in Dublin. The Financial Times reports Tuesday on development problems too in Paris and notes that the "UK’s capital has more than 20 projects of 50 storeys or more, either under way or in the pipeline, that will provide homes for billionaires and global corporations alike."

In County Dublin there is no shortage of zoned  land for development.

In 2014 the Society of Chartered Surveyors Ireland (SCSI) said that there were 2,233 hectares of land zoned and available for the development of up to 100,000 homes in the four main local authority areas of Dublin. The New Housing Supply Capacity Report for the period 2014-2018 found that more than 100,000 residential units that would accommodate almost 270,000 people, could be built on the zoned land.

The Government's approach so far on social housing and the housing crisis in general is to respond with band-aid type measures such as freezing rents and approving smaller size apartments but some fresh ideas are needed together with a willingness the cull sacred cows.

Some of the reasons given for this lack of construction sound plausible at first glance but don't stack up. For example, it is often said that banks won't lend like they used to, or that Irish developers are either too bust or too greedy to build. But none of that explains why Dublin in particular is witnessing such a boom in commercial construction activity, especially new office space. Or why international developers, who work off relatively tight margins in many other countries, can't make the numbers stack up in Ireland.

Private sector pensions are a low priority for career politicians as they are guaranteed superannuated bliss.

Even when the corporation tax rate was cut by more than 20% for domestic firms from the late 1990s, there was no effort made to force business to provide pensions coverage as a quid pro quo.

Whether broadcast or print, media firms should intermittently publish a record of refusals by politicians to be interviewed.

On key policy issues, parties should be given forensic questions to answer while for example the promise of jobs without any supporting detail should not be reported without a qualification. Distorted data should not be published as fact.