The 2016 Democracy Index, published this year by the Economist Intelligence Unit (EIU) — a sister company of the Economist — shows that almost one-half of the world’s countries can be considered to be democracies of some sort, but the number of “full democracies” has fallen from 20 in 2015 to 19 in 2016. Ireland has a joint ranking of 6 while the US has been downgraded from a “full democracy” to a “flawed democracy” because of a further erosion of trust in government and elected officials there.

In Europe and the US, the political class seems increasingly out of touch with the people they purport to represent and often seems to express contempt for sections of the electorate. Hillary Clinton put half of Mr Trump’s voters in her “basket of deplorables”. In the UK, Nigel Farage’s UK Independence Party (UKIP) picked up support from workers in the Midlands and the north of England who no longer feel much connection with the Labour Party, the traditional party of the working class. Mr Trump deliberately drew on the popular revolt against the political order epitomised by the Brexit vote. He visited the UK the morning after the vote and hailed the result as signifying “independence day”. He drew the parallel often at his campaign-trail rallies. He invited Mr Farage to the US to address his audience. In the closing days of the campaign he said that if he won it would be “Brexit plus, plus, plus” for the US. Mr Trump was also able to count on the distinct lack of enthusiasm for Mrs Clinton among working class black and Hispanic voters. Unsurprisingly, in 2016 black voters did not turn out for Mrs Clinton, a doyenne of the white political establishment who failed to inspire them with hope in the manner of Barack Obama in 2008 and 2012. Although they voted overwhelmingly for Mrs Clinton, they did not do so in sufficient numbers to tip the result. The Hispanic voter turnout was higher than ever before, predominantly favouring Mrs Clinton, but Mr Trump increased the Republican share of the Hispanic vote compared with Mitt Romney in 2012.

About 55.7% of the US voting-age population (VAP — includes people who have not registered to vote) cast ballots in the 2016 presidential election, according to Census Bureau data.

According to Pew, the US polling organisation, the United States is far behind many countries in the Organisation for Economic Cooperation and Development, "most of whose members are highly developed, democratic states. Looking at the most recent nationwide election in each of the 35 OECD member nations, the US placed at 28.

Data from the International Institute for Democracy and Electoral Assistance (International IDEA), based in Stockholm, show that the most recent highest turnout rates in parliamentary elections among OECD nations were in Belgium (87.2%), Sweden (82.6%) and Denmark (80.3%). Switzerland, famous for referenda, has the lowest turnout in the OECD and in the 2015 Swiss legislative elections less than 39% of the voting-age population cast ballots.

There is a history of voter suppression in the US and this week the Supreme Court refused to revive a restrictive North Carolina voting law that a federal appeals court had struck down as an unconstitutional effort to “target African-Americans with almost surgical precision.”

Last week President Trump signed an executive order creating a commission to investigate alleged voter fraud that will be led by a right-wing Republican who is Kansas’ secretary of state, Kris Kobach, and Vice President Mike Pence — without any evidence, the ignorant president claims that there was massive fraud in last November elections.

The Chronicle of Higher Education reports that the [Brennan Center for Justice at the New York University School of Law last week called Mr. Trump’s commission a "sham." A report by the Brennan Center on the 2016 election found that, of 23.5m votes surveyed, an estimated 30 incidents of noncitizen voting were referred for further investigation or prosecution.]

The president of the United States is in effect supporting white supremacists in their efforts to frighten minority voters from voting. 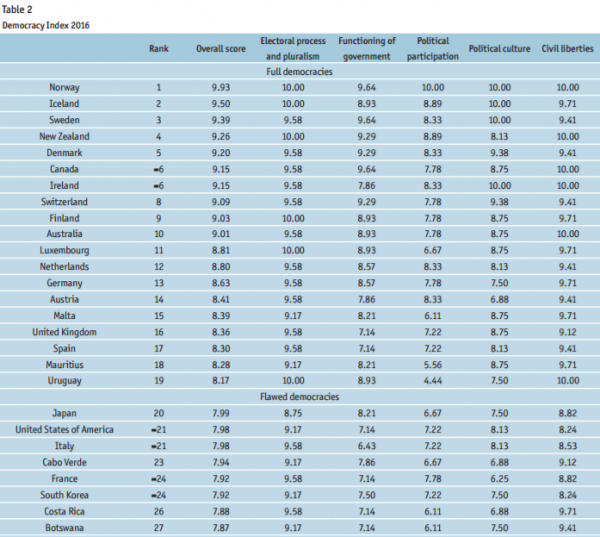 Full democracies according to the EIU: Countries in which not only basic political freedoms and civil liberties are respected, but which also tend to be underpinned by a political culture conducive to the flourishing of democracy. The functioning of government is satisfactory. Media are independent and diverse. There is an effective system of checks and balances. The judiciary is independent and judicial decisions are enforced. There are only limited problems in the functioning of democracies.

Flawed democracies: These countries also have free and fair elections and, even if there are problems (such as infringements on media freedom), basic civil liberties are respected. However, there are significant weaknesses in other aspects of democracy, including problems in governance, an underdeveloped political culture and low levels of political participation.