Innovation & Productivity: Productivity like the issue of pensions tends to trigger glazed-over eyes but it's key to growth and incomes and how working smarter not working harder can benefit people around the world. New OECD research shows that the gap between high productivity firms and the rest has been increasing over time, suggesting that there are barriers to the diffusion of new innovations.

Over the past decade a slowdown in productivity has been attributed to a slowing in technology innovation in the aftermath of the IT surge in the 1990s. However, others see the rapid adoption of the smartphone and the fall in the cost of entry for Internet startups with online computing and data storage, as harbingers of much more change ahead.

The Future of Productivity project at the Organisation of Economic Cooperation and Development (OECD) focuses on the micro level of firms and it has identified a breakdown in the diffusion of frontier innovations to other firms.

OECD research shows that the slow productivity growth of the “average” firm masks the fact that a small number of firms are experiencing strong gains. In effect the productivity of the most productive firms — those on the “global productivity frontier” in economic terms — grew steadily at an average 3.5% per year in the manufacturing sector, or double the speed of the average manufacturing firm over the same period.

This gap was wider in services. Private, non-financial service sector firms on the productivity frontier saw productivity growth of 5%, eclipsing the 0.3% average growth rate. Even more striking the gap between the globally most productive firms and the rest has been rising over time, in particular in the services sector.

The frontier is being dominated by some firms but in July at the Petersen Institute for International Economics, in Washington DC, Catherine Mann, chief economist of the OECD said: "If we’re looking for sort of the biggest bang for the buck for most countries, it’s not innovation. It’s not the sexy stuff. It’s taking stuff that’s already out there and incorporating it into the average business. And that implies the hard work of changing the structure of an economy and the characteristics and the policy levers. The innovation frontier is not actually the important thing for the gains that most countries can get, with regard to productivity."

Chiara Criscuolo who is a senior economist in the Structural Policy division of the Science Technology and Industry Directorate at the OECD, wrote in August that "It’s a failure by many firms to adopt new technologies and best practices. Indeed, the main source of the productivity slowdown is not a slowing in the rate of innovation by the most globally advanced firms, but rather a slowing of the pace at which innovations spread throughout the economy: a breakdown of the diffusion machine.

Dr Criscuolo said the "list of obstacles to diffusion is long. Four key factors need to function well for effective diffusion to take place. First, global connections need to be extended and deepened, so that firms can learn from successful counterparts across the world. This requires trade, foreign direct investment, participation in global value chains, and the international mobility of skilled labour.

Second, new firms need to be able to enter markets and experiment with new technologies and business models. The productivity slowdown coincided with a near-collapse of overall business investment and a slowdown in business dynamism, reflected in a decline in business startups. These trends need to be reversed.

Third, better “matchmaking” is needed across the economy, to ensure that the most productive firms have the resources — labour, skills, and capital— to grow. The larger the frontier firms become, the greater the extent to which their good performance gets reflected in overall economic growth. Unfortunately, the most productive and dynamic firms do not always grow to optimal scale. In some economies, the most advanced firms have productivity levels close to the global frontier, but they are under-sized relative to their peers in other countries. 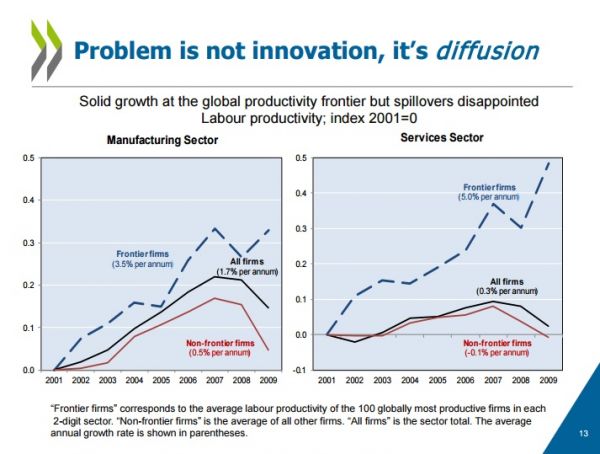 Fourth, investment in innovation should extend beyond technology to include skills, software, organisational know-how (i.e. managerial quality). Innovation depends on the bundling of these investments, and policy initiatives should reflect that".

The OECD says that since the knowledge economy increasingly requires skills that many education systems are struggling to provide, countries will reap greater growth and equity benefits through policies that more effectively allocate skills. Around one-quarter of workers in OECD economies report a mismatch between their existing skills and those required for their job. A better use of human talent supports the growth of innovative firms and could boost labour productivity by up to 10% in some economies, according to the report.

The OECD identifies a number of policies to sustain productivity growth, including:

1) Product market reforms and bankruptcy laws that do not excessively penalise failure, to improve firms’ incentives to experiment with new technologies, allocate resources more efficiently and maximise the benefits of participation in global value chains; 2) Policies that make labour mobility easier. These include housing market policies that facilitate residential mobility, the promotion of adult and lifelong learning, and employment protection legislation that does not impose too heavy or unpredictable costs on hiring and firing. These policies can underpin the growth of productive firms, partly via lower skill mismatch. 3) More public investment in basic research, to support the continued emergence of breakthrough innovations and knowledge diffusion; 4) Innovation policies that ensure a level playing field between incumbents and new entrants, which is often missing in existing incentive schemes. R&D tax incentives should be equally accessible and beneficial to incumbent, young firms and startups.

Catherine Mann, chief economist of the Organization for Economic Cooperation and Development (OECD) presented her groundbreaking study The Future of Productivity at the Peterson Institute on July 9, 2015. Jason Furman, chairman of the Council of Economic Advisers, shared his thoughts on current productivity puzzles, including the Council's views of the productivity trend in the United States.

Catherine L. Mann, chief economist of the Organization for Economic Cooperation and Development (OECD), and Dan Andrews, senior economist of the OECD, present their groundbreaking study "The Future of Productivity" at the Peterson Institute on July 9, 2015. Jason Furman, chairman of the Council of Economic Advisers, shared his thoughts on current productivity puzzles, including the Council’s views of the productivity trend in the United States.