Half Ireland's population recipients of public welfare in 2015

About half of Ireland's population were recipients of public welfare in 2015 according to data from the Department of Social Protection and the European Commission.

In 2015 3m recipients of payments from the Department of Social Protection (DSP) were logged and there were 123,000 beneficiaries of the European Common Agricultural Policy.

When corporate welfare is included together with suppliers of services and goods to the public sector that are a significant ratio of revenues, the high level of dependence on the State would once have been called socialism!

There is double counting in the DSP data while the numbers logged for child benefit are households, but in population terms, there are 569,000 more children than households. Excluding recipients of free travel, electricity discounts, and rent supplement as they would likely be counted elsewhere, results in a net total of 2.4m or 51% of the population. 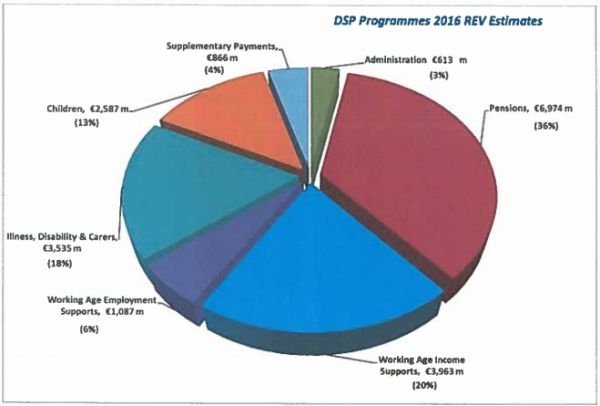 This chart shows the breakdown of expected spending in 2016