Age of Anger and Delusion: Brexit, Trump and Sanders

There is a common thread that links the leaders of the Brexit campaign — the UK referendum in June on Britain leaving the European Union — and the insurgent campaigns of Donald Trump and Senator Bernie Sanders for the presidency in the United States: they are tapping public anger with the status quo but none of them have set out in credible detail how they would implement their goals after victory.

The problem for the Brexit advocates is that a victory would not just result in short-term uncertainty as there would be up to two years where the UK would have to get agreement with the other 27 member countries on new trading arrangements and while Germany has a big trading surplus with Britain, the members from Eastern Europe would not support big concessions while their citizens would be banned from working in the UK — with a fragile economy, two years or maybe more of uncertainty would not be positive for investment.

The EU has forced Switzerland to change its corporate tax regime and why would the City of London retain its existing market privileges without any new restrictions?

Gideon Rachman, Financial Times columnist, wrote yesterday that the Vote Leave campaign, fronted by Boris Johnson, mayor of London, has made two key pledges. It promises to control immigration by withdrawing Britain from the EU’s laws on the “free movement of persons” while Britain would continue to enjoy free trade with the EU.

Under EU law, these four freedoms are inseparable. Countries such as Switzerland and Norway — that are not part of the EU but still want unfettered access to the EU market — have had to accept free movement of labour. So which is it to be? Controls on immigration or full access to the internal market?

There is lots of waffle about developing trade elsewhere from people who have never sold anything overseas. Britain like Ireland is a poor exporter and the British innovation record is also poor.

...the planned June referendum on EU membership has already created uncertainty for investors, [and] a Brexit could do severe regional and global damage by disrupting established trading relationships.

Matthew Elliott, Vote Leave chief executive, said the Fund has "been consistently wrong in past forecasts about the UK and other countries."

The IMF has talked down the British economy in the past and now it is doing it again at the request of our own Chancellor. It was wrong then and it is wrong now [ ] The biggest risk to the UK's economy and security is remaining in an unreformed EU which is institutionally incapable of dealing with the challenges it faces, such as the euro and migration crises.

Waffle on the accuracy of economic forecasting aside, the UK last reported a trade (goods + services) surplus in 1998 and among its major trading partners, in recent times the only countries where a goods surplus has been achieved is with the US and Ireland. 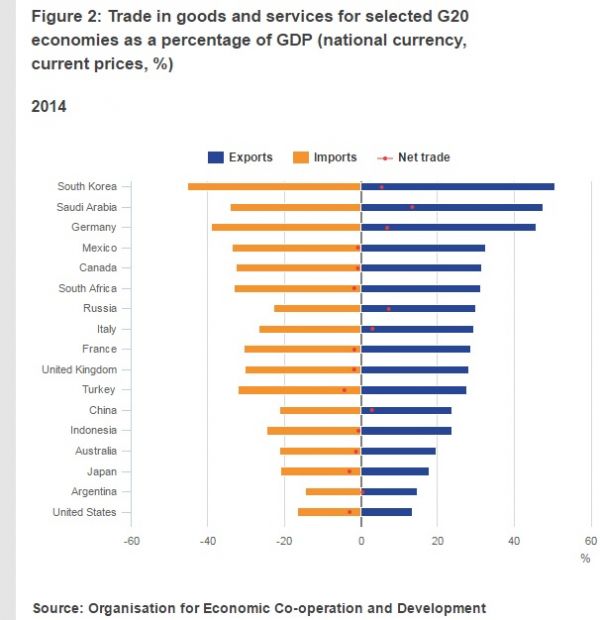 The last year the UK reported a current account/ balance of payments surplus (trade + net movements in investment income) was in 1983.

Mark Carney, the Bank of England governor, last January underlined that Britain was “relying on the kindness of strangers” in running an annual current account deficit equivalent to over 5% of national income, which it must finance either by borrowing or by attracting investment from abroad.

Facts don't matter for the typical naive Eurosceptic who wishes to restrict immigration and sees great potential for a sovereign UK, even minus Scotland, to make them proud again, despite economic hassles.

Donald Trump, the New York property developer, used to be a liberal Democrat, who has a history of hiring low-pay immigrants for his projects, and is running as an anti-immigrant, anti-abortion, anti-free trade Republican. Bernie Sanders is an independent democratic socialist who is not a member of the Democratic Party and he has not helped to raise funds for Democrats even though as president he would need their support.

While both are anti-trade deals and Trump has won the support of racists for his anti-immigrant policy, Sanders supports immigration policy reform but he did join Republicans in 2007 to vote against the last big drive led by Senator Edward Kennedy to overhaul America's immigration laws — Sanders supported labour unions who opposed a guest worker program provided for in the bill.

Both candidates appeal to workers who lost manufacturing jobs because of trade with China, trade deals and automation.

Germany has responded to changes in manufacturing much better than the US and among the big manufacturing nations, German pay is the highest.

Trump would impose a 45% tariff on Chinese imports and force Apple to return manufacturing to the US and Sanders would renegotiate trade deals.

The North American Free Trade Agreement (NAFTA) which has been in force since 1994 is one of the most contentious agreements. The overall net effect of NAFTA on the US economy has not been significant because total trade with both Mexico and Canada was equal to less than 5% of US GDP in 1993.

The US car industry would be exposed if NAFTA was significantly changed because of integration with Mexican supply chains.

Sanders badly stumbled on details of policies when he recently met the editorial board of the New York Daily News which on Tuesday endorsed Hillary Clinton. Meanwhile Trump makes policy on the hoof and some of his comments on foreign issues have been juvenile.

Facts can be inconvenient but huge changes such as replacing the current health system will not move from aspiration to reality without lots of work. 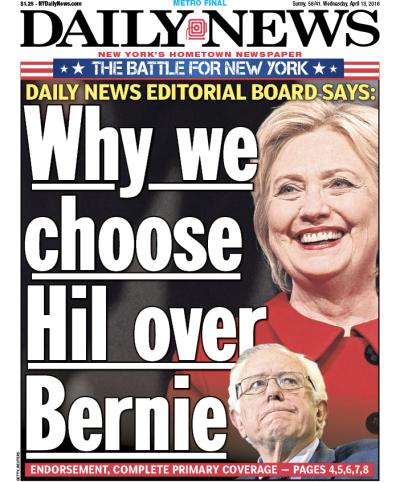 the middle class is steadily withering. Four decades ago, the backbone of the USA. commanded almost two-thirds of the national income. Today, it clings to just 43% while the top tier has roared ahead to claiming almost half, along with wealth that is fully seven times larger than the holdings of the entire middle class. Sum it up: The global financial meltdown of 2008 supercharged trends that continue to degrade standards of living, worsen income inequality and narrow the paths to better. Meanwhile, despite Obama’s let’s-pretend rituals, Washington has delivered no significant help since the 2009 stimulus, let alone game-changing economic programs. At this severe breakpoint, the central challenge confronting the next President is clear: She or he must ignite and rebalance the United States economy in favor of the many while also extending an extra helping hand to ease burdens that have grown too heavy for some.

On April 19, New York Democrats will have unusual say over the party’s nominee. They have in Clinton a superprepared warrior realist. They have in opponent Bernie Sanders a fantasist who’s at passionate war with reality. By choosing Clinton, Empire State Dems would powerfully signal that the party has gotten real about achieving long-sought goals.

Clinton is unsparingly clear-eyed about what’s wrong with America while holding firm to what’s right with America.

She fully understands the toll that adverse economic forces have taken on the country.

She is supremely knowledgeable about the powers a President can wield to lift fortunes in need of lifting.

She possesses the strength and the shrewdness to confront the tough politics of advancing an ambitious Democratic agenda in the White House.

Still more, she is a cauldron-tested globalist who had the spine to give Obama a thumb’s up for taking out Osama Bin Laden and who is far the wiser about the use of American power, having served as secretary of state and seen the consequences of the war in Iraq.

These truths about America’s most well-known public figure are long past debating among Democrats, above all in New York, the state Clinton represented in the US Senate.

Here then the moment has arrived to reckon, instead, with truths about Sanders and his programs:

Subjected to meaningful scrutiny for the first time, the senator from Vermont proved utterly unprepared for the Oval Office while confirming that the central thrusts of his campaign are politically impossible.

Which, paradoxically, is good news, because some of the most prominent Sanderisms would likely wreak epic economic damage.